Drafting of the 14th Five Year Plan for development is at a crucial stage. What climate and energy targets are worth watching? 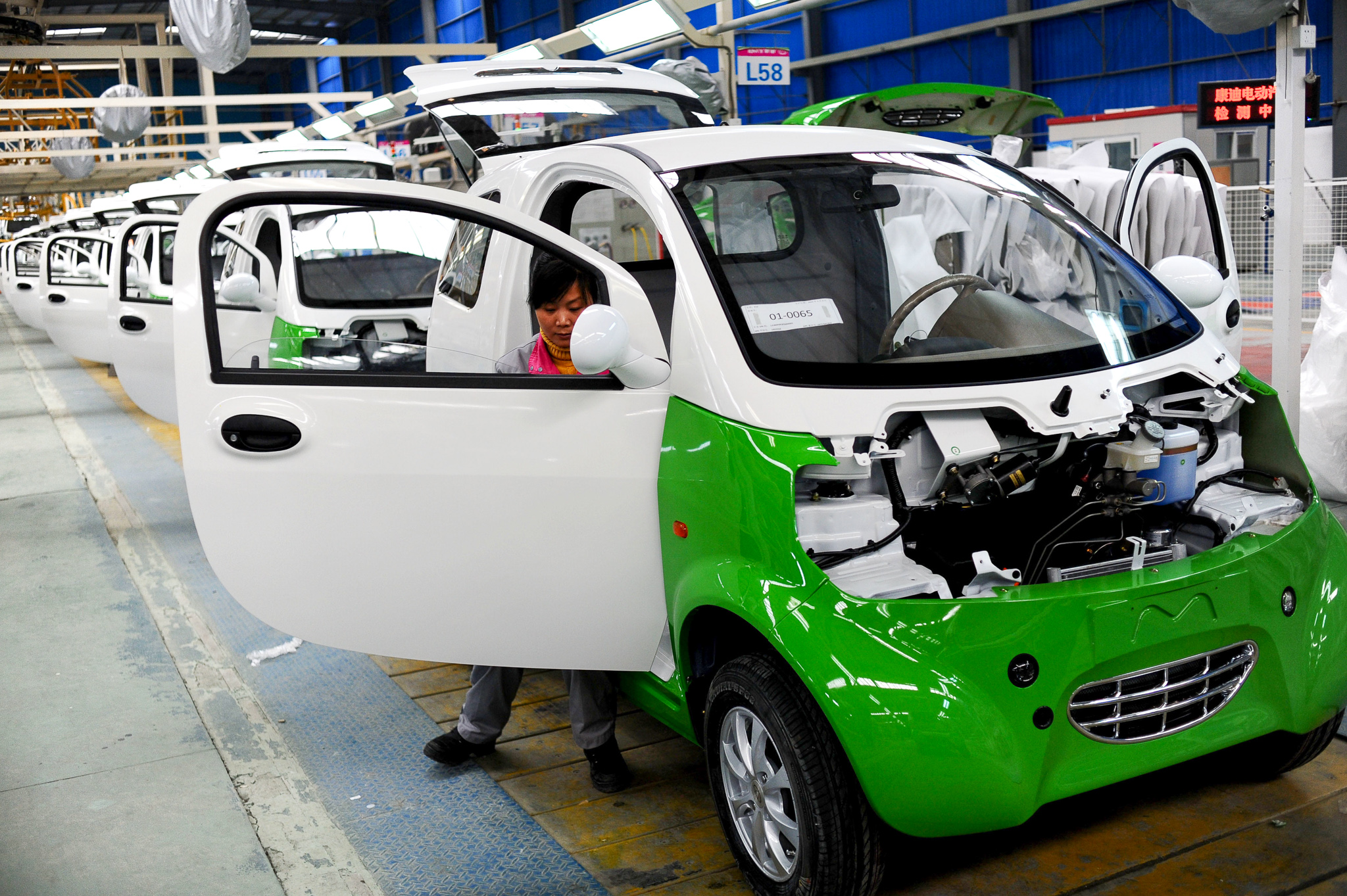 In the coming months, China’s central government will formulate, discuss and ultimately publish goals to direct the country’s social and economic development for the next five years and beyond.

Key to the start of this process was the Fifth Plenum of the 19th Central Committee of the Communist Party of China, held in Beijing in late October.

The meeting was attended by over 360 top party leaders and provided guidance for the 14th Five Year Plan period, 2021-2025. It will be a reference point for the government as it drafts the actual plan. On this occasion, the meeting also provided guidance for a long-term vision for 2035, when the state has set the key deadline to “basically achieve socialist modernisation”.

The Fifth Plenum issued a guide to action with a long title – Proposals for Formulating the 14th Five Year Plan (2021-2025) for National Economic and Social Development and the Long-Range Objectives Through the Year 2035 (hereafter “the Proposals”). It also provided interpretation on the meaning of “green development” and offers a view into what China’s leadership is thinking about climate action.

From party proposals to the 14th FYP

The drafting of a FYP is always important for Chinese policy. In terms of official discourse, the 14th FYP will be the first as China moves from its 2020 goal of creating a “moderately prosperous society” towards the 2050 goal of comprehensive socialist modernisation. That makes this FYP especially important.

Of particular interest is how China will integrate into the FYP its September commitments to achieve peak carbon before 2030 and carbon neutrality by 2060. The plan will be seen by many as a test of how seriously the pledge is being taken at the policy level. Climate policy observers also hoped to see some signals from the Fifth Plenum.

It should be noted that the Proposals are intended to provide guidance only, and consist mainly of qualitative statements. Next, the State Council’s National Development and Reform Commission will lead the drafting of a more concrete outline of the 14th FYP. This will be in accordance with the overall direction and strategy set in the Proposals. It will take on board opinions from other government bodies, research institutes and stakeholders, and ultimately produce specific targets and projects. That draft will be submitted to the National People’s Congress (NPC) for approval at next year’s Two Sessions, which usually take place in March, although they were delayed to May this year due to the pandemic.

Once the 14th FYP outline is approved by the NPC, government departments and local governments will come up with their own special plans. For the first time this will include a plan on climate change, the drafting of which will be led by the Ministry of Ecology and Environment (MEE). The plans for energy and the power sector, to be drafted by the National Energy Administration, are expected after the 2021 Two Sessions.

One of the goals set in the Proposals is for per capita GDP to match that of moderately developed nations by 2035. There is no generally accepted definition of such nations but based on classifications from the World Bank, the International Monetary Fund and the Organisation for Economic Co-operation and Development on high-income and advanced economies, Chinese experts have interpreted moderately developed nations as having a per-capita GDP of US$20,000 to $40,000. As China’s per-capita GDP was US$10,000 in 2019, analysis shows this will require China to maintain steady real growth over the coming 15 years – at an average of 3.6%, 4.8% or even 5.4%, depending on the calculations used. Economists generally hold that maintaining such high growth for that long a period is difficult. The media have commented that while the Proposals may have seemed low-key, in this respect they have set a concrete target for future economic growth.

The vision in the Proposals for carbon emissions and ecological conservation should be understood in this context of China’s economic trajectory. They stipulate that by 2035 “China’s carbon emissions will gradually decline in a state of stabilisation after peaking, and there will be fundamental ecological and environmental improvements”.

This wording on economic growth and carbon emissions sets the boundaries for climate and energy targets for the coming period, and particularly for the 14th FYP. The need for higher GDP means the next 15 years will continue to see a powerful drive for development and growth that is better quality and more efficient. Meanwhile, the “stable and declining” formulation indicates that no sudden drop in post-peak carbon emissions is expected.

This was reflected in a study recently published by Tsinghua University’s Institute for Climate Change and Sustainable Development. In the study’s recommended roadmap for 2060 carbon neutrality, energy consumption would peak five years later than carbon emissions, in 2035, and only then would a steeper emissions decline begin, to approach zero emissions relatively quickly. The year 2035 is therefore a watershed moment for China’s emissions. This was confirmed by the Proposals, which mandate that the 14th FYP targets should be “anchored” to the 2035 longer-term goal.

Even though the Proposals only briefly and qualitatively touch upon climate change, they nevertheless lay an important political foundation for key 14th FYP climate and energy targets.

Particular attention will be paid to binding targets on carbon intensity, the proportion of non-fossil fuels in the primary energy mix, and coal power capacity, in both the outline of the general 14th FYP and the more specific plans. Those targets will have a huge impact on low-carbon and emissions-reduction efforts over the coming five years.

Binding targets have been set on the proportion of non-fossil sources in the energy mix since the 12th FYP (2011-2015). Over the decade, this measure has risen from 8.3% in 2010 to 16% this year. China’s Nationally Determined Contribution, made under the Paris Agreement, set 2020 and 2030 targets of 15% and 20% respectively. Accordingly, the media has suggested that the 14th FYP will see a target of around 18%. But with China’s new carbon neutrality pledge, it is generally expected that China will adjust the target in line with its recent commitments, spurring on further growth in wind and solar power with a higher target for the proportion of renewables in the energy mix.

Commenting on future growth for fossil fuel energy, particularly coal, during a discussion on the 14th FYP, the MEE’s climate department indicated China is set to take stronger measures on fossil fuel consumption, with strict controls on coal and restrictions on coal power expansion. It remains to be seen if coal power capacity during the 14th FYP will be larger than the limit of 1,100 GW set by the 13th FYP for energy development.

Following on from China’s commitment on carbon neutrality, the MEE has said its 14th FYP for combating climate change is in the works. This would be the first national-level plan specific to climate change, and alongside an almost-certain toughening of carbon-intensity targets, experts have suggested it should also add a carbon cap for the power sector and reductions targets for non-CO2 greenhouse gases.

The commitment on carbon neutrality has led to louder calls for an economy-wide carbon emissions cap in the 14th FYP. The above-mentioned Tsinghua University study suggested a cap of 10.5 billion tonnes by 2025. Emissions in 2020 are expected to be 10.33 billion tonnes.

Unlike most nations that have committed to carbon neutrality, China’s economy is still growing rapidly, and that growth is not yet uncoupled from carbon emissions. Yet moving from a peak to zero emissions will take China around 30 years less than already-developed nations. The job of deciding how to ensure emissions start to fall as soon as possible is only just getting started.